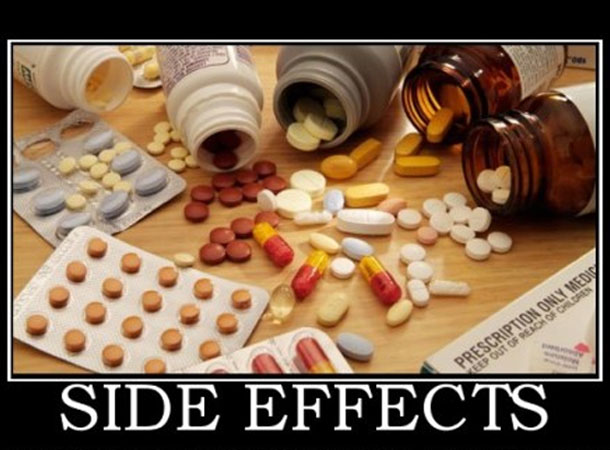 All medicines, including those available without a prescription, can still have annoying or harmful side effects. Here are a few of the more common ones.

While there are now restrictions on the sale of codeine, it’s still a very common active ingredient in over-the-counter medicines . Constipation is a very common side effect of codeine.

While topical steroids can greatly reduce inflammation and itching, they can also have significant side effects on the skin. While most of these side effects are seen with long-term use, some may pop up in just a few days of use. Side effects include:

3. Ibuprofen and worsening of asthma

According to some reports about 20% of adults with asthma – and 5% of asthmatic children – have what is called aspirin-induced asthma. In extreme cases, such attacks have been reported to be fatal.

Some asthmatics develop potentially severe asthma symptoms if they take aspirin or non-steroidal anti-inflammatory drugs (NSAIDs) such as ibuprofen. As a rule of thumb, asthmatics are advised to use paracetamol. If ibuprofen is taken, asthmatics should be aware of any effect it has, and, if they feel any worsening of asthma symptoms steer clear of using it.

Antihistamines are commonly used to treat allergies, rashes and motion sickness. But with many people, particularly kids and the elderly, there will be some affect on the central nervous system as well – usually in the form of drowsiness.

Children taking antihistamines may seem sleepier and more fatigued than usual. But they can have the opposite effect and make the child agitated or hyperactive until the medicine’s effect has worn off.

The active ingredients in some nasal sprays – like oxymetazoline – may reduce nasal congestion almost immediately but there’s a catch. You should not use this medicine continuously for longer than seven days because the medicine can become less effective if used excessively. Nasal congestion can come back – an effect called “rebound congestion” – when you stop using the medicine after using it for too long, many times resulting in addiction of these drops.