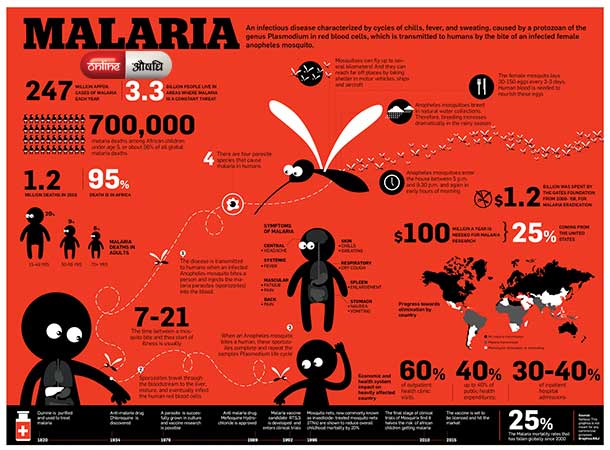 Malaria is a life-threatening blood disease caused by parasites transmitted to humans through the bite of an infected Anopheles mosquito. Once an infected mosquito bites a human and transmits the parasites, those parasites multiply in the host’s liver before infecting and destroying red blood cells. Malaria is usually found in tropical and subtropical climates where the parasites that cause it live. Congenital malaria occurs when a mother with malaria passes on the disease to her baby at birth.

The disease can be controlled and treated if diagnosed early on. Unfortunately, this is not possible in some areas of the world lacking in medical facilities, where malaria outbreaks can occur.

Researchers are working hard on improving the prevention of malarial infection, early diagnosis and treatment, with just one malaria vaccine close to being licensed so far. 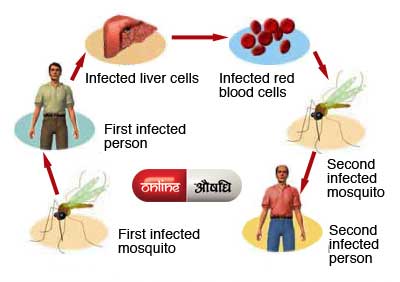 What is malaria?
Derived from the Italian word for “bad air,” it was originally thought swamp fumes in Rome were the cause of malaria, as outbreaks were a regular occurrence there.
If left untreated, malaria can be fatal due to the fast reproduction of the parasite within a host’s bloodstream.
There are more than 100 types of Plasmodium parasites, 5 which can infect a variety of species. Scientists have identified five types that specifically infect humans, they are:

Causes of malaria:
Malaria is caused by the bites from the female Anopheles mosquito, which then infects the body with the parasite Plasmodium. This is the only mosquito that can cause malaria.

The successful development of the parasite within the mosquito depends on several factors, the most important being humidity and ambient temperatures.

When an infected mosquito bites a human host, the parasite enters the bloodstream and lays dormant within the liver. For the next 5-16 days, the host will show no symptoms but the malaria parasite will begin multiplying asexually.7

The new malaria parasites are then released back into the bloodstream when they infect red blood cells and again begin to multiply. Some malaria parasites, however, remain in the liver and are not released until later, resulting in recurrence.

An unaffected mosquito becomes infected once it feeds on an infected individual, thus beginning the cycle again.

The video below from the Howard Hughes Medical Institute visualizes how a single bite from an infected mosquito can quickly turn into the life-threatening disease.

Symptoms of malaria:
According to the Centers for Disease Control and Prevention (CDC), malaria symptoms can be classified in two categories: uncomplicated and severe malaria.

Uncomplicated malaria is diagnosed when symptoms are present, but there are no clinical or laboratory signs to indicate a severe infection or the dysfunction of vital organs. Individuals suffering from this form, can eventually develop severe malaria if the disease is left untreated, or if they have poor or no immunity to the disease.

Symptoms of uncomplicated malaria typically last 6-10 hours and occur in cycles that occur every second day, although some strains of the parasite can cause a longer cycle or mixed symptoms. Symptoms are often flu-like and may be undiagnosed or misdiagnosed in areas where malaria is less common. In areas where malaria is common, many patients recognize the symptoms as malaria and treat themselves without proper medical care.

Severe malaria is defined by clinical or laboratory evidence of vital organ dysfunction. This form has the capacity to be fatal if left untreated. As a general overview, symptoms of severe malaria include:

Malaria is a life-threatening condition. Treatment for the disease is typically provided in a hospital. Your doctor will prescribe medications based on the type of parasite that you have. In some instances, the medication prescribed will not clear you of the infection. Parasites that are resistant to drugs have been reported. These parasites make many drugs ineffective. If this occurs, your doctor may need to use more than one medication or change medications altogether to treat your condition.

Complications of Malaria:
Malaria can cause a number of life-threatening complications like