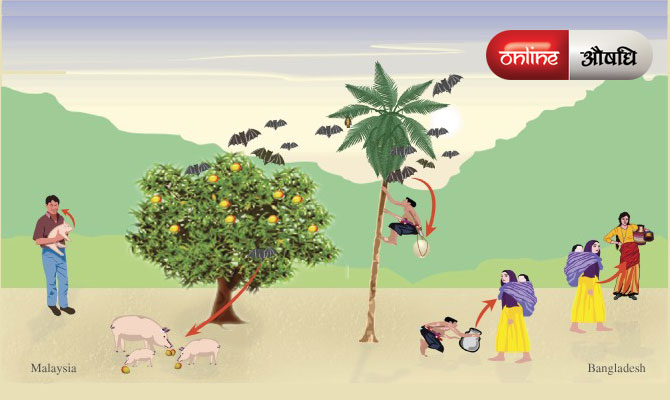 What is Nipah Virus(NIV) ?
Nipah Virus(NIV) infection is a newly emerging zoonosis(a disease that animals can transmit to humans, known as a zoonosis) that causes severe disease in both animals and Human.
People first discovered NiV in a village named Kampung Sungai Nipah in 1999 in Malaysia, the virus was named after the village.
This first recorded outbreak began in 1998-1999 and reached Singapore. A new strain occurred in 2001 in Bangladesh and India. Small outbreaks of NiV have happened in these countries since 2001. An outbreak in India (state of Kerala) occurred in May 2018. The virus is moderately contagious as it needs close contact and usually infects the family members and/or medical caregivers of NiV-infected individuals.
Fruit Bats are natural hosts of NIV

How is it transmitted ?

Precautions : What you must do to stay safe from Nipah Virus

Source : WHO & Centers for Disease Control and Prevension, US